There ain't stopping Mr. Worldwide from taking over the stage at his "Can't Stop Us Now" tour. Pitbull's 'extensive 50+ date' tour is stopping by at Cynthia Woods Mitchell Pavilion on Sunday, September 11th, 2022. Joining him is Sean Paul, the Jamaican rapper who featured in Pitbull's party popper track "Shake Señora". With a slew of global party hits up his sleeve including "Timber" with Kesha, "Feel This Moment" with Christina Aguilera, "Time of Our Lives" with Ne-Yo, and "I Know You Want Me (Calle Ocho)", the title of 'Mr. Worldwide' definitely suits the man himself who's music marked timeless dance parties across the globe. So, catch Pitbull live at the "Can't Stop Us Now" tour by booking your tickets now! 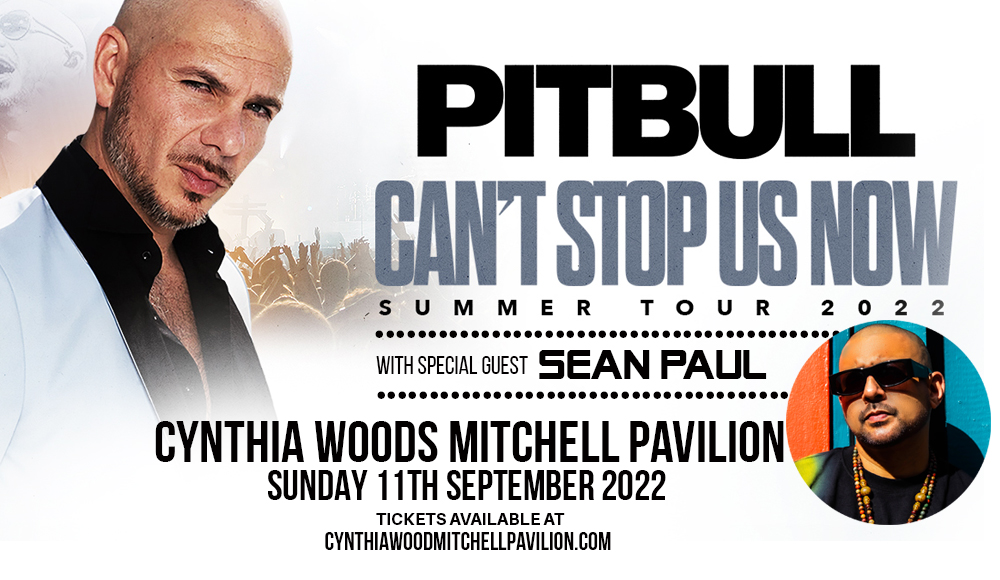 'It's Mr. 305 checkin' in for the remix' – rapper Pitbull says in the first verse of his breakout hit single "I Know You Want Me (Calle Ocho)" in 2009. Since then, Pitbull has become a nameplate in the club and party music scene with his signature bars and energy-inducing choruses that hypes the world up. In this new decade, Pitbull is set to carry on the legacy of producing timeless hits that get the party started. He's announced that a new album is in the works named "Timeless", sharing that “it's about making Timeless music”.

Born as Armando Christian Pérez, Pitbull grew up in Miami to Cuban parents. Influenced by the genre of Miami bass, he credits Miami as a "melting pot" that made him who he is today through different life lessons.

Selling over 65 million records across the globe later, Pitbull was once a lad naming himself 'Mr. 305' which is Miami's area code, to bagging another title 'Mr. Worldwide' with hits that got the crowd dancing from different continents.

Though marking world-domination through his breakout hit "I Know You Want Me (Calle Ocho)" in 2009, Pitbull's bite into the scene dates back to 2001. Robert Fernandez of Famous Artist Music & Management said that he "saw the eagerness and hunger he had".

By 2009 with the release of his fourth album "Pitbull Starring in Rebelution", a revolution indeed took place in Pitbull's career with his single "I Know You Want Me (Calle Ocho)" peaked at #2 on the Billboard Hot 100. The album sold over 7.5 million digital singles and album worldwide.

Since then, Mr. Worldwide has bagged hits after hits in his succeeding records and collaborations with various artists. Some of his best hits of the 2010s include "Give Me Everything" featuring Ne-Yo, Afrojack and Nayer, "International Love" featuring Chris Brown, "Time of Our Lives" with Ne-Yo, "Timber" featuring Kesha, "Feel This Moment" featuring Christina Aguilera, "Dame Tu Cosita" with El Chombo and Karol G featuring Cutty Ranks, and "No Lo Trates" with Natti Natasha and Daddy Yankee.

And the list ain't stopping there with a new album called "Timeless" in the works. As Pitbull kickstarts the "Cant Stop Us Now" tour, fans are in for a wild party full of the last decade's best hits and big surprises by Mr. Worldwide himself. Book your tickets now!