Heavy metal gods Iron Maiden bring their explosive Legacy of the Beast Tour to Cynthia Woods Mitchell Pavilion on Sunday 22nd September 2019! Steve Harris and co are pulling out all the stops to bring fans the Iron Maiden experience of a lifetime:

“We’re immensely proud of this show and we’ve had great reactions from the many fans who came to see us in Europe earlier this year. The production is based on our mobile game THE LEGACY OF THE BEAST which basically takes various incarnations of Eddie into many different Maiden Worlds. This inspired us to put together a stage show to take our fans through different Worlds and experiences set to appropriate songs. It is not that easy designing different Worlds on stage and we put a huge amount of work into this to make it work and the end result we feel is our most spectacular and certainly the most complex show to date. We’ve got all kinds of crazy things going on, including a replica Spitfire plane dominating the stage during Aces High, tons of pyro, a giant Icarus, muskets, claymores and some truly marvellous flame-throwers which I have a hell of a lot of fun with, as you will see! And of course we have Eddie, as you’ve never seen him before, and absolutely loads of other surprises. I’ve had the time of my life playing with all these magnificent props on stage, it’s been fantastic, we can’t wait to bring this show to you!” 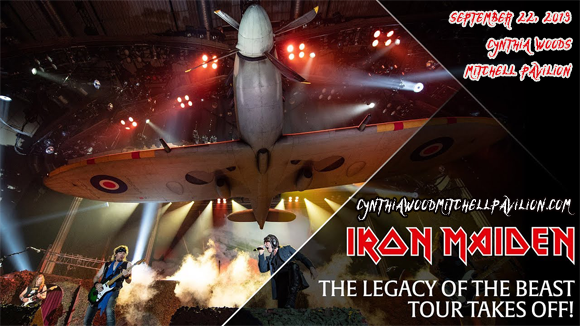 One of the most renowned and successful heavy metal bands of all time and pioneers of the new wave of British heavy metal, English heavy metal band Iron Maiden was formed in 1975 in East London, England. To date, they have played over 2000 live shows and have sold over 100 million copies of their albums worldwide. Lead by primary songwriter and bassist Steve Harris, the band entered the UK albums chart at number four with its eponymous 1980 debut album. The following year, after the release of the band's first two albums, vocalist Paul DiAnno was replaced by former Samson vocalist Bruce Dickinson. Dickinson fronted the band throughout their most successful period (1981 – 1993), which saw them release a plethora of gold and platinum certified albums, including: The Number of the Beast (1982), Piece of Mind (1983), Powerslave (1984), Live After Death (1985), Somewhere in Time (1986) and Seventh Son of a Seventh Son (1988). In 1993, Wolfsbane vocalist Blaze Bailey was brought in to replace Dickinson. Bailey fronted the band from 1994 – 1999 and released two albums with the group (1995's The X Factor and 1997's Virtual XI), before Dickinson returned to front the band in 1999. In 2002, the group was honoured with the Ivor Novello Award for international achievement.