South African comedian and host of the Daily Show Trevor Noah comes to Cynthia Woods Mitchell Pavilion on Saturday 22nd June 2019! Having recently filmed the Netflix special Afraid of the Dark, based on his book Born A Crime, the Emmy Award winner and bestselling author is touching down on his Loud and Clear Tour, bringing brand new material to the stage! Tickets available now! 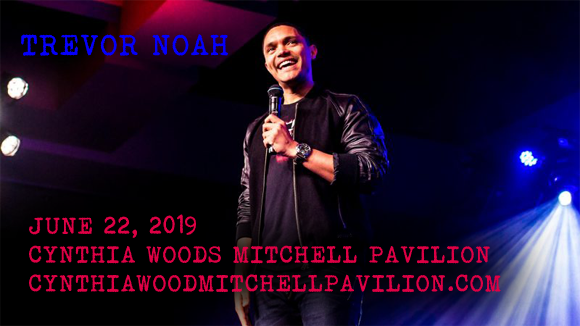 Best known for hosting American late-night talk and news satire television program The Daily Show, South African comedian, writer, producer, political commentator, actor, and television host Trevor Noah began his career in South Africa in the early 2000s. From 2004 – 2006, Noah hosted the TV programme Run The Adventure, and around the same period he was touring the country's comedy clubs as a stand-up comic. Over the next few years, Noah became a television regular, hosting a variety of shows and was featuring as a Strictly Come Dancing contestant in the program's fourth series. In 2011, Noah relocated to the United States, and the following year he became the first South African stand-up comedian to appear on The Tonight Show, also becoming the first to appear on Late Show with David Letterman the year after that. From there, Noah's career picked up even more momentum, with appearances on more American talk shows, British panel shows and starring in his own comedy specials. He became the  Senior International Correspondent for The Daily Show in 2014, and in 2015 he succeeded long-time host Jon Stewart. His autobiographical comedy book Born a Crime (2016) garnered critical acclaim, and in 2018 he was named by Time magazine as one of the 100 most influential people in the world.