The Fleetwood Mac rock goddess, Stevie Nicks, is heading back to the road for the second leg of her headlining US tour! Adding 12 new dates to the roster, she's bringing along a special guest, the A Thousand Miles singer Vanessa Carlton. You can catch the legendary rocker live on stage at Cynthia Woods Mitchell Pavilion on Sunday, 9th of October 2022. The legendary vocalist spawned multi-platinum hits both for her work with Fleetwood Mac and her solo craft. From singing, "Stop Draggin' My Heart Around" at the onset of the 80s, Nicks has taken part in defining the rock scene, inducted into the Rock and Roll Hall of Fame in 2019 as a solo artist. Don't miss out on timeless rock classics and legendary bangers live on stage with the one and only Stevie Nicks by booking your tickets now! 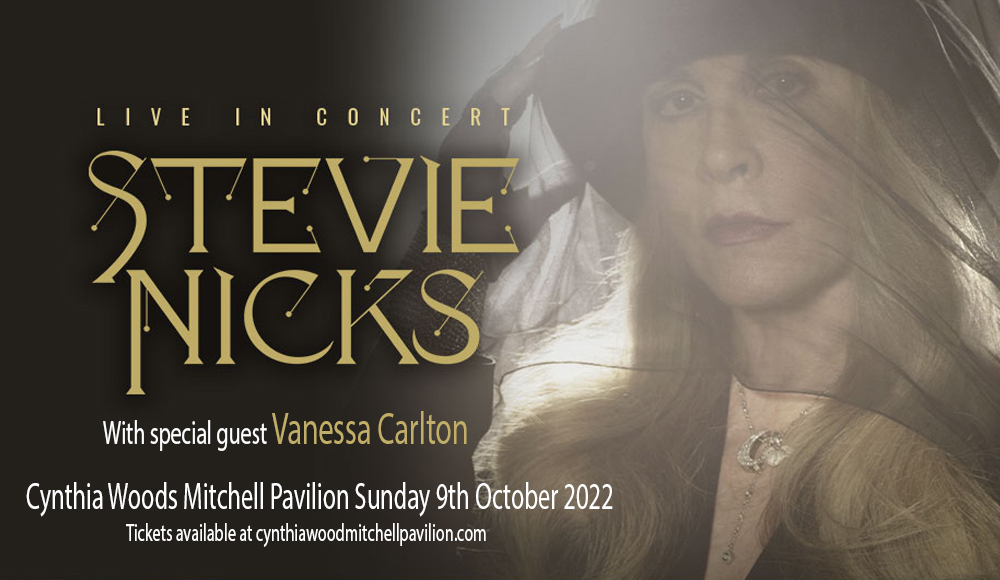 Adding 12 new dates to the second leg of her headlining US tour, Stevie Nicks Live in Concert is an experience you definitely can't miss! The legendary rocker also announced that she's bringing along Vanessa Carlton to her roster of shows. Releasing a new live album and concert film, 24 Karat Gold the Concert, and a new single "Show Them the Way" last 2020, Nicks is back to show the world what true rock music is. Her 2020 single marked her first time releasing new music in six years since her 2014 record "24 Karat Gold: Songs from the Vault".

Stevie Nicks' solo career took off while staying as a member of her also highly-acclaimed band Fleetwood Mac. She released her debut album "Bella Donna" in 1981, amssing critical acclaim with Rolling Stone hailing her as "the Reigning Queen of Rock and Roll". The record reached #1 on the Billboard 200, bagging a 4x Platinum certification from the RIAA. The album featured her hit single "Stop Draggin' My Heart Around" with Tom Petty and the Heartbreakers. The record was also included in Billboard's "Greatest of All Time Billboard 200 Albums" chart.

From then on, Stevie Nicks made waves as a prominent rock icon, dropping hit records and singles for years to come. Her best hits and fan favorites include "Stand Back", "Talk to Me", "Rooms on Fire", "Leather and Lace" with Don Henley, and "Edge of Seventeen".

With a legendary record of hits and accolades, Nicks played an integral role in defining the craft of rock music. In 2020, she took the world by surprise, releasing a live album and concert film, and more so a brand new single "Show Them the Way" – her first new song in six years since her 2014 release.

As 2022 paved the way for the big return of live concerts, Nicks is bringing back legendary rock to stages across the country. With music that continues to breakthrough airwaves as essential rock anthems, she's set to share her signature electrifying energy with the crowd like its the 80s!

On this tour, she's bringing along Vanessa Carlton, who she's helped grow in her music career. The "A Thousand Miles" singer previously shared that Stevie Nicks helped her appreciate performing her debut hit – which she shared that she felt dreaded to keep on doing so. With a new perspective on her craft, Carlton told PEOPLE, "Stevie Nicks, I have the great honor of calling her a very dear friend of mine — she's really my mentor —and she said to me, this was years ago, she said, 'Vanessa, do you think there is any show that I play that I'm not playing "Landslide"?"

So, don't miss out on an awesome night where legendary women share the stage, rocking it out, and sharing their electrifying energy like there's no tomorrow! Led by the one and only Stevie Nicks, it's gonna be a wild night so better book those tickets now!