Shinedown fans, we’ve got some epic news for you!! Your favorite band are on tour in 2019, with their brand new album “Attention Attention.” With support from Badflower, Dinosaur Pile-Up, and Broken Hands, they’re headed to the Cynthia Woods Mitchell Pavilion on Friday 21st June 2019 – are you ready to be singing along in that crowd?? Get your tickets now, while they last!! 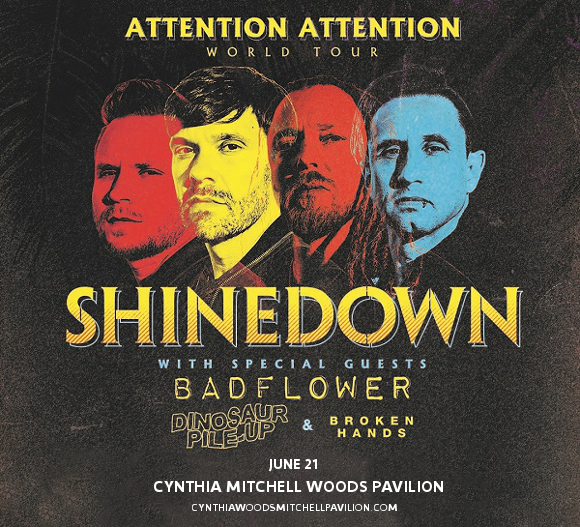 The new album reflects some new ideas and themes for the band, in particular to do with the self and discovery. “I feel like I got better at just being myself if that makes any sense. "DEVIL" is the beginning of the story,” singer Brent Smith said, describing some of the central themes of the new album. “The person that is inside of this story, to be quite honest with you, is the listener. So, this album is about putting yourself into the album and putting yourself into the chair.”

Now, it’s time to hear all the new sounds from Shinedown in person. What are you waiting for?? Those tickets aren’t going to last – get them while you can!!