Pop-rock superstars Matchbox Twenty are coming to Cynthia Woods Mitchell Pavilion on Friday 30th June 2023 (Rescheduled from Friday 1st July 2022) as part of their previously postponed tour with The Wallflowers! The chart-topping, multi-platinum selling hit-makers are primed and ready to give fans the night of their lives as they bust out all the hits from their insane career that made them one of the biggest alternative bands of the late-'90s!

"Half of us realizes we're in the hospitality industry: It's our job to make sure people have a good time," Thomas says of the tour. "The other half is just playing music we enjoy playing together." 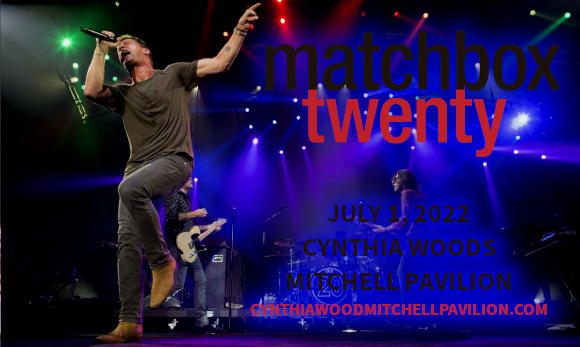 Matchbox Twenty found instant success with the release of their debut album, Yourself or Someone Like You (1996), just one year after they formed in Orlando, Florida. The album launched several singles that received extensive airplay – "Push", "3 A.M.", "Real World", and "Back 2 Good" – leading to the album selling over 12 million copies in the US and receiving platinum certification by the RIAA. It reached number five on the Billboard 200 and was also a multi-platinum hit in Australia, Canada, and New Zealand. Mad Season (2000), the group’s sophomore effort, was also a multi-platinum success, peaking at number three on the Billboard 200, and launching the number one single “Bent”. After the release of their similarly successful third studio album, More Than You Think You Are (2002), the group took a hiatus to focus on their solo careers – particularly lead singer Rob Thomas who had become a three-time Grammy Award-winner due to the enormous success of “Smooth”, his 1999 hit with Santana. The band briefly reappeared in 2007 with the  'retrospective' album Exile on Mainstream, which contained seven new songs, as well as remastered versions of several of the band’s hits. It would be another five years before the band released their fourth official (and most recent) studio album, North, which debuted at number one on the Billboard 200.