Soul sensation Leon Bridges comes to Cynthia Woods Mitchell Pavilion on Friday 26th April 2019 in support of his new album, Good Thing! The singer, whose vintage-tinged R&B recalls greats like Sam Cooke and Otis Redding, will be performing sings from the record, including singles "Bet Ain't Worth the Hand", "Bad Bad News" and "Beyond"! A must-see for fans of amazing voices and heartfelt, feelgood tunes! 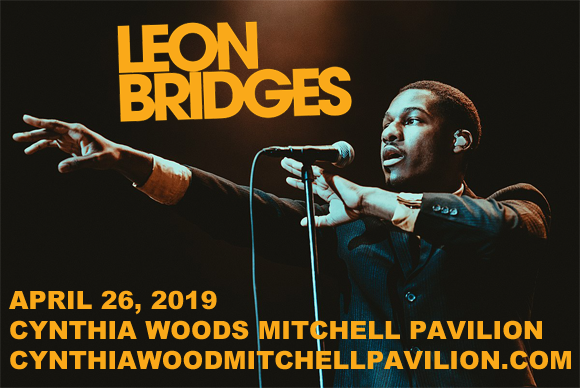 A homegrown talent from Fort Worth, Texas, who spent years performing on his local open mic circuit, American gospel and soul singer, songwriter and record producer Leon Bridges signed with Columbia Records in 2014. Before signing to Columbia, Bridges attracted the attention of guitarist Austin Jenkins and Joshua Block of White Denim, who used vintage recording equipment to help him record demos fro Soundcloud that in turn attracted Columbia's attention. Bridges released his debut album, Coming Home, a year after signing with the label and the album's lead single (also called “Coming Home”) peaked at number seven on the Billboard Triple A chart and became a Top 10 Most Viral Track on Spotify. This led to a huge surge in popularity for Bridges, and the album was nominated for Best R&B Album at the 58th Annual Grammy Awards. His follow-up album, Good Thing, was released in May 2018, supported by the singles "Bet Ain't Worth the Hand", "Bad Bad News" and "Beyond", and debuted at number three on the Billboard 200.