It's been a while, but are you ready for the metal tour of the summer…? Korn and Staind are joining forces for a mighty nostalgia-fest that will bring back all those teenage memories! The dynamic duo of bands will be heading to Cynthia Woods Mitchell Pavilion on Sunday 19th September 2021 and fans can expect brand new music from both groups, who have new releases line-up and ready to go! Support comes from '68 and Fire from the Gods! 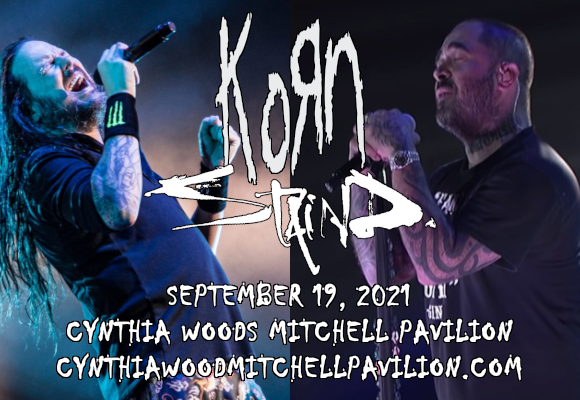 Arguably the definitive nu-metal band, Korn was formed in Bakersfield, California in 1993 and burst onto the scene the following year with its self-titled debut. Its 1996 follow-up, Life is Peachy, was a bonafide hit, reaching number three on the Billboard 200, but it was 1998’s Follow the Leader that made them a household name, topping the chart – as did Issues (1999). In fact, to date, every album since the band’s debut has reached the Top 10 of the Billboard 200, with eight reaching the Top Five. Seven of the band’s 13 studio albums have been certified platinum or multi-platinum by the RIAA. Eight-time Grammy Award-nominees, they have won two Grammys, and two MTV Video Music Awards out of eleven nominations. Their most recent album, The Nothing (2019), was named by Loudwire as one of the 50 best metal albums of 2019.