Grunge metal and nu-metal lovers alike rejoice! Korn and Alice In Chains are teaming up this year for a massive co-headlining tour. Both known for changing the face of modern metal as we know it, this promises to be a truly unique experience. With special support acts still to be confirmed, they’re headed to the Cynthia Woods Mitchell Pavilion on Saturday 20th July 2019! Tickets on sale NOW – be quick about grabbing yours! 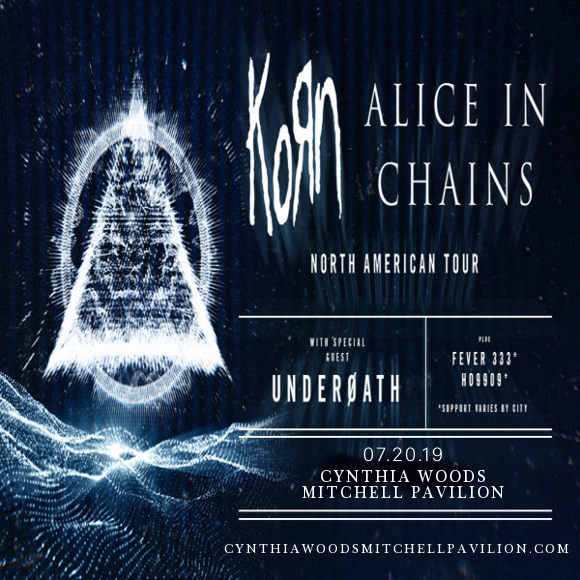 Korn have been teasing fans with news of a new album in the works. Details are hazy, but it’s likely that the record will be out later this year, with the band telling fans to expect more of the same groove-based work that they became so well loved for in the first place. Get ready to hear some new songs live!!

Alice In Chains are touring with their latest critically acclaimed album, “Rainier Fog,” stated by critics to be their best yet. “Each track showcases masterful songwriting and inspired lyricism,” enthused Metal Hammer. “Rainier Fog sees the band breathing new life into their signature sound, with a diverse and deeply emotional collection that history will surely view as a career-defining statement.”

Don’t delay – grab those tickets while they last!!