Chris Stapleton is headed to Cynthia Woods Mitchell Pavilion on Saturday 6th November 2021 as part of his 2021 All-American Roadshow Tour! Stapleton's roadshows are known for being one of the best country shows you could see all year – the Grammy Award-winning performer is an exceptional stage presence with a band of second-to-none musicians who really know how to get a crowd going! Not only that, but his support line-ups are nothing short of brilliant, bringing excellent artists to the stage and this year he'll be joined by Jamey Johnson & Yola! 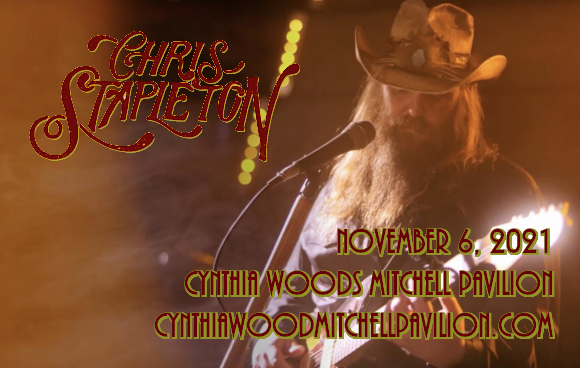 Chris Stapleton is the man behind a multitude of hit singles, not to mention one of country music’s most exciting modern artists. Stapleton began his career as frontman of bluegrass band The SteelDrivers from 2007 – 2010, and has two hit singles with the group before moving on to found Southern rock band The Jompson Brothers. However, his big break came in 2015 when he released his debut solo album, Traveller, which reached number one on the US Billboard 200 and was certified triple platinum by the RIAA. The album also won Best Country Album at the 58th Annual Grammy Awards in 2016 and the title track won Best Country Solo Performance at the same ceremony. Stapleton also won three awards at the 2015 Country Music Association Awards: Album of the Year, Male Vocalist of the Year, and New Artist of the Year. His second studio album, From a Room: Vol 1, was released in May 2017 and earned him three further Grammy Awards, also becoming the best-selling country album of the year. From a Room: Vol 2, its follow-up, was released that December, and both albums debuted at number two on the Billboard 200. In addition to his solo work, Stapleton has written and co-written over 170 songs, including six number-one country songs. He has written for and co-written with artists as diverse as Kenny Chesney, Luke Bryan, Adele, Brad Paisley, Dierks Bentley, Vince Gill, Peter Frampton, Sheryl Crow, and Ed Sheeran. His fourth and most recent studio album is 2020’s Starting Over.